This week, I met with representatives from the Royal College of Nursing to support their Scrap The Capcampaign against the Government’s public sector pay cap which has seen pay rises frozen at 1% since 2010. Today, Labour is leading an opposition day debate on the NHS pay cap, to fight for a raise in wages and a fair deal for our NHS staff. 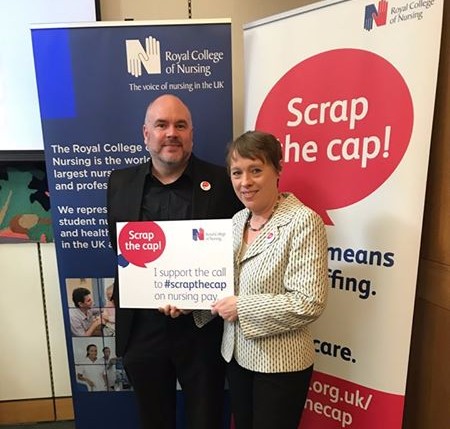 For nurses, the cap has meant a 14% real terms fall in pay when the ever rising cost of living is taken into account. The result is a 40,000 shortfall in nurse staffing levels for our NHS, and nurses who do work in the public sector struggling to make ends meet. For the first time in a decade more nurses are leaving the profession than joining.

On Wednesday the campaign to scrap the capwon a victoryin the House of Commons afterLabour secured support for its OppositionDay Motionin favour of increasing NHS pay. The motion even got backing from the Democratic Unionist Party (DUP). It is the first time the DUP have voted against the Tories since Theresa Mayagreed to invest£1billion in Ireland in exchange for a confidence and supply agreement to vote together to passlegislation after the general election.

Labour’s motionpassed on Wednesday without being pushed to a vote after it became clear the government had no majority to oppose the call for an end to the public sector pay cap for NHS workers.

The passing of this motion is a clearsign that there is no longer a majority in the House of Commons for many of the damaging austerity policies introduced by the Tories. The Government must end this austerity driven freeze in public sector pay, and give workers the wages they deserve. The future of our public services depends on it.