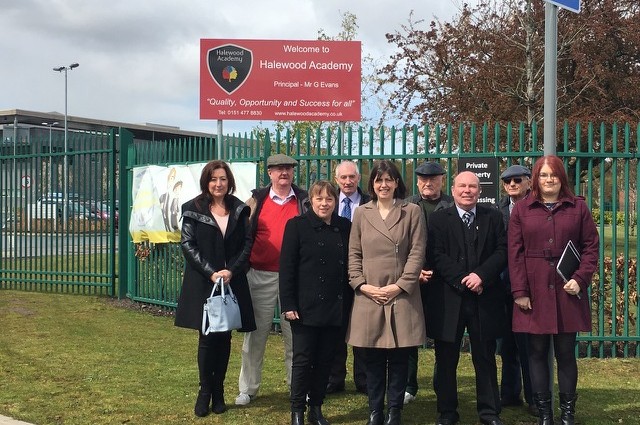 Shadow Culture Secretary and MP for Garston and Halewood, Maria Eagle, was today joined by Shadow Education Secretary, Lucy Powell MP, at a meeting with local parents to hear their concerns about the proposed closure of Halewood Academy Sixth Form.

“This Tory Government have no understanding of the consequences that their forced academisation programme is having in areas like Knowsley. The proposed closure of Halewood Academy Sixth Form will leave the Borough without any A Level provision and that is totally unacceptable.

I have written to the Regional Schools Commissioner Vicky Beer and asked her to refuse permission to close the Sixth Form while an alternative A Level provider in the Borough is found. Until that happens the Government should provide the funding required to Halewood Academy so that its Sixth Form can remain open.

My constituents are understandably angry and concerned. The closure sends the wrong message to local young people, it places a cap on their aspirations and makes it more difficult for them to continue their education beyond the age of 16. There is little financial or other practical support available for students who will have to travel outside the Borough to attend A Level providers across Merseyside. That this decision was made just weeks before many of the pupils are sitting A Level exams has added unnecessary pressure and uncertainty which is deeply unfair.”

“It was great to talk to parents directly about the impact the loss of Sixth Form provision in Knowsley will have on the opportunities and aspirations of young people locally. It’s clear that they want a stronger voice in their children’s education yet the Tories are doing the opposite and their plans to force all schools to become academies against their wishes will mean that the system is more fragmented as local communities will be further shut out of decisions affecting local schools. As this example shows, that’s patently wrong and not in the best interests of local people.”